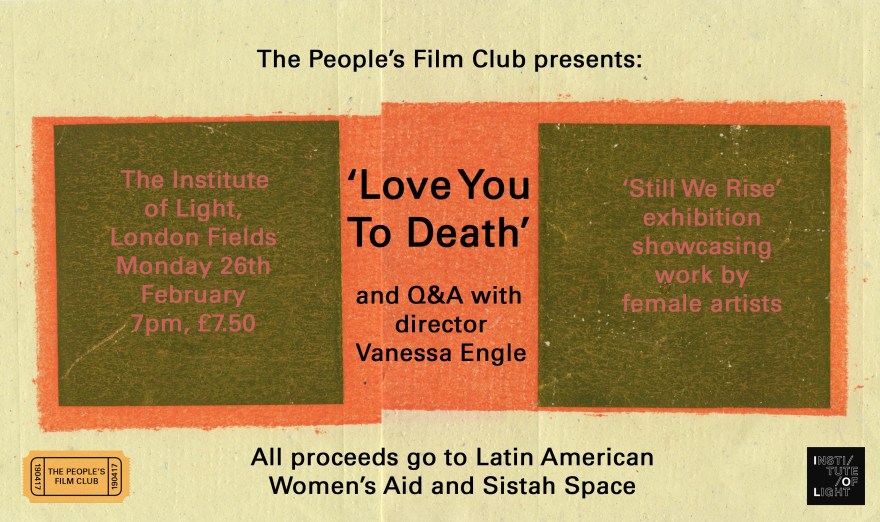 Love You To Death is an uncompromising documentary, which shows in the starkest terms the reality of domestic violence in the UK. On average, two women in England and Wales are killed every week by a current or former male partner. This statistic betrays a systemic societal corruption, and yet as an issue, violence against women remains largely undiscussed. The film seeks to break this silence, telling the stories of seven of the 86 women killed by their partners in the UK in 2013. It is a difficult watch. It gives us chance to get to know these women; their personalities, their quirks, their lives, and the families left with only stories to share. At the same time, it reflects our system’s complete failure to protect them from the male perpetrators who ultimately ended their lives.

Following the film, we hosted a panel discussion, centred around what can be done to support women at risk of male violence. We were joined by Vanessa Engle, the film’s director, along with Ngozi Fulani (the founder of Sistah Space) and Garbiela Quevedo and Stefanie Alfarez (representing Latin American Women’s Aid). The panel reflected upon the deadly consequences of cuts to women’s support services. Austerity measures have decimated grassroots services, which often form the first point of contact for women seeking help. The compounded difficulties for BME women to find support was highlighted by both Sistah Space and LAWA representatives. Barriers such as institutional racism, language, cultural norms, and immigration fears compound to create a lack of truth in traditional services, which often do not fully consider the varied needs of women from different communities and cultures. Sistah Space and LAWA are two organisations which explicitly set out to rectify this problem, and provide BME women with the vital services they need. It is integral that these organisations are supported, but also that people proactively support the women in their lives and look out for signs of violence.

When planning the evening, we wanted to reflect the incredible strength of women’s solidarity. We wanted to pay tribute to those fighting for women’s equality, and to protect our most basic right to live a life free from violence. We hosted an exhibition of art, with the work of 24 artists, entitled ‘Still We Rise’ – a tribute to the courageous life and writing of Maya Angelou. We hosted a ‘Notes of Love’ stand, where we wrote notes of solidarity for women who have experienced sexual violence. It is a beautiful project created by My Body Back Project, who work to support survivors of sexual violence.

The evening raised £350, which we donated to Latin American Women’s Aid (LAWA) and Sistah SPACE Against Domestic Abuse.